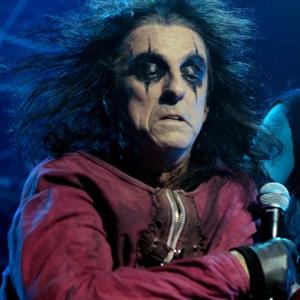 'I'll Bite Your Face Off' shock rocker Alice - real name Vincent Furnier - was initially reluctant to include a female singer on a track for his 'Welcome 2 My Nightmare' album, until he realised it would be exactly the sort of person his Alter Ego would dislike the most.

He explained to todayonline.com: "I thought, if it was Alice's nightmare and he was going to meet up with the devil, who would be the one person that he would rather not have to deal with? A pop diva. And I called up Ke$ha, and she said she would love to do it.

"Of course, I did this not realising at the time that she probably is the devil!"

'Blow' singer Kesha has proved controversial because of her racy lyrics about partying and getting drunk, causing concerned parents to protest against her, starting facebook groups such as 'Kesha - You are a Bad Influence'.

Meanwhile, Alice's stage show sees plenty of theatrics and usually climaxes with him staging having his head cut off by guillotine, although he admits it doesn't always work out.

Referring to the 70s spoof rockumentary film about a haphazard rock group, he added: "You can almost expect to have a few 'Spinal Tap' moments where everything goes wrong.

"And if that happens, the audience really gets a great kick out of it, because they know that wasn't supposed to happen. So they're in on the joke. And I kind of like that. But 99 per cent of the time, the show works the way it's supposed to."