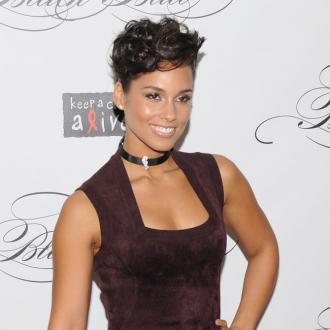 The 'Girl on Fire' hitmaker - whose charity assists those affected by HIV and AIDS in Africa and India - paid tribute to the talk show host for her philanthropic efforts, including her school, The Oprah Winfrey Leadership Academy for Girls in South Africa, which launched in 2007, at the annual event at the Apollo Theater in New York

She said: ''It's a universal truth, Oprah makes change happen.''

Oprah replied: ''You try to keep a child alive and I try to educate them as best as I can.''

Before Oprah took to the stage, a video played on screen explaining the launch of the school and also detailing the 58-year-old star's own struggles travelling with maids from the inner city out to the suburbs to attend a better high school.

Oprah said: ''When I look at African girls I see myself. I continue to work for them to have the same opportunities that I have.''

The evening boasted performances from stars including Jennifer Hudson, Bonnie Raitt and Brittany Howard of Alabama Shakes, as well as an auction hosted by Whoopi Goldberg.

One bidder, pharmaceutical billionaire Stewart Rahr, offered to raise his pledge from $100,000 to $250,000 for a trip to South Africa - but only if Alicia would join him and his friends.

While the businessman didn't raise his bid, he later pledged $1 million to the charity.

The event was originally planned for November 1, but was canceled due to Superstorm Sandy.

Alicia said: ''There are places in the world where Keep a Child Alive serves where they have a Hurricane Sandy every day.

''They don't have electricity, they don't have heat ... and that made me more invigorated to make sure this Black Ball happened.''