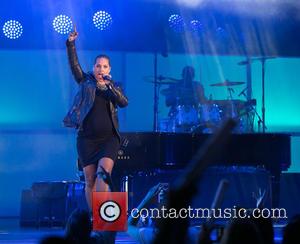 R&B singer Alicia Keys has penned an article for a U.K. newspaper urging Brits to join her fight to highlight social injustice.

The Empire State of Mind hitmaker recently launched a new charity campaign called We Are Here and wrote her latest single as the drive's anthem.

She has now taken her activism to Britain by writing a piece for the country's The Guardian newspaper in a bid to rally support in the U.K.

In the article, titled "I won't waste my fame on empty things", Keys writes, "As someone with a huge platform to reach people it makes me ask, how can I stand by and just watch that (injustice) happen?... It's not enough for me to tweet and go on news shows talking about my work. I want to be in the thick of it, to draw attention to things I believe are wrong...

"I know critics will say that people like me should stick to making records. But musicians are voters too. We are artists and we are human, alive to what is going on around us. We seem to be able to connect to millions of people who have either lost faith in the system or who need to feel a part of a community... I intend to keep on speaking out, as do a number of my peers. We feel it is our duty to use our fame for something bigger than empty things."

In October (14), the pregnant singer stepped up her activism by protesting outside the Nigerian consulate in New York to raise awareness about the plight of a group of Nigerian schoolgirls who were kidnapped by Islamic extremists earlier this year (14).