The movie began shooting back in 2014.

In her new film Tulip Fever, Alicia Vikander plays a married woman in 17th century Amsterdam who falls for an artist as he paints her portrait. Although perhaps it isn't strictly accurate to call it a "new" film. Shot in 2014, Tulip Fever has been moved around the release schedule for the past three years, as the producers sought just the right slot. Some have suggested this means that there's something wrong with the movie. But producer Alison Owen insists that this is "a precious jewel of a film that I know people would love and enjoy if they got to see it."

For the busy Vikander, this is the latest in a steady stream including blockbusters (The Man from UNCLE and Jason Bourne) and arthouse films (The Light Between Oceans and her Oscar-winning role in The Danish Girl).

"Of course I've had a run of great opportunities and characters to play," Vikander says, "But on Tulip Fever but I was shooting this scene with Holliday Grainger that just felt like something new. It just came so easily, and we were having so much fun. And only when we were chatting afterwards did I suddenly realise why: I'd just made five films in a row, and this was the first one where I had a scene with another woman!"

The Swedish-born actress admits that it wasn't a big deal to play an unfaithful wife in the movie. "My parents were divorced when I was 3 months old and my father is happily married to his fourth wife, so marriage as an idea has never meant that much," she says. "For me, the word family means everything. That's the true connection. And I think it's better to come up with your own romantic ideas because that's what will give you wonderful memories."

Since making Tulip Fever, Vikander has wrapped production on a number of other roles, including Lara Croft in the Tomb Raider reboot. The intense physicality was new for her on that project. "During one scene I was thrown into a river of ice-cold water 50 times with my hands tied," she says. "It had to be continuous, as they didn't have time to dry me off in between, because that's when you risk getting hypothermic. My family and friends laugh now because I'm thrown into freezing water at some point in all my films! With Tulip Fever, they've actually cut the scene where I had to run into the sea wearing my costume of seven skirts, various different corsets and a huge collar, which were so heavy floating around me in the water." 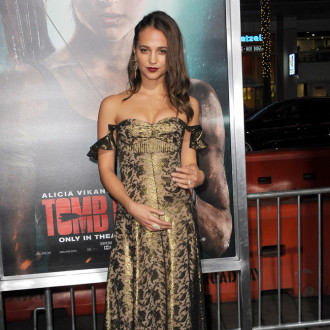