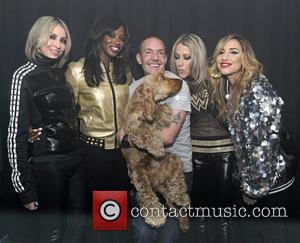 All-girl group All Saints reunited for their first festival performance in a decade in Chelmsford, England on Saturday (16Aug14).

The group, fronted by sisters Natalie and Nicole Appleton, was among the big draws on the first day of the annual V Festival - and the ladies didn't disappoint, performing a string of big hits, including Booty Call, Never Ever, Pure Shores and Under The Bridge.

It was a big day for the ladies at the two-site festival - Lily Allen, Blondie, Rita Ora, Janelle Monae, Katy B and Sophie Ellis-Bextor were also on the bill at both Hylands Park, Chelmsford and sister site Weston Park in Staffordshire, England.

Justin Timberlake headlined the first day in Chelmsford, taking the stage with his big band in a Tom Ford suit. He thrilled one festivalgoer, who was celebrating her birthday, by posing for a 'selfie' with her during his set.

Ed Sheeran, Bastille, Elbow and Kaiser Chiefs were also among the highlights of Saturday's festival, while The Killers headlined the event in Staffordshire with Paolo Nutini, Lily Allen, Rudimental, Ora and Jason DeRulo among the top attractions there.

The Killers thrilled fans with their rendition of Iggy Azalea's Fancy, with frontman Brandon Flowers telling the crowd, "We've sort of been working on something and we wanted to show you a little bit of it, if you don't mind hearing it."

The low point of the first day came when rockers Manic Street Preachers had to scrap their planned performance at Hylands Park after suffering travel issues in Hungary.

The Welsh rockers were in the country for a gig at the Sziget Festival on Friday (15Aug14) and they were due to fly to the U.K. for their V Festival slot in Chelmsford, England on Saturday, but the band was forced to cancel after getting stuck on a plane for five hours at an airport in Budapest before the flight crew informed them the aircraft would not be taking off.

The band did make it to the stage for their set at the Staffordshire site on Sunday (17Aug14). All acts who played the Chelmsford site on Saturday repeated their performances at Weston Park on Sunday, and vice-versa.