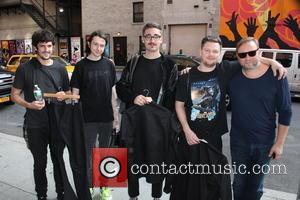 Picture: Alt-J - Ahead of film ‘The Late Show with David Letterman’, celebrates were photographed arriving at the Ed Sullivan Theatre, where the show is filmed....

Nominees for this year's Mercury Music Prize have yet to be announced but the odds for the 2012 Album of the Year going to indie rockers Alt-J and their debut album 'An Awesome Wave' have soared to the top of the board on skybet.com.
With odds of 6/4, Alt-J look to be a dead cert to (at least) receive a nomination for their album. However, in an interview with Bbc Radio 1 Newsbeat at Leeds Festival last weekend where they performed, bassist Gwil Sainsbury insisted that they weren't thinking about that right now. 'It's in the back of our minds but we're not thinking about it', he said. Following close behind are psychedelic 4-piece Django Django and their debut self-titled album with odds of 4/1 and Emili Sande's 'Our Version of Events' at 6/1. The XX's 'Coexist' album and 'Rispah' by The Invisible complete the top five to win with equal odds of 10/1. Not doing so well on the list are TrioVD with 'Maze' and 'ssss' by Vcmg both at 150/1.
It's refreshing to see some new blood being tipped to win this year after nineties rocker PJ Harvey scooped up the prize in 2011 with her album 'Let England Shake'. That was the second time she's won an Album of the Year award since 2001 where her fifth album, 'Stories from the City, Stories from the Sea', won her the Prize. This year's shortlist announcement will take place on September 12th 2012 with the awards show scheduled for November 1st 2012.