Taking the boom of British bass culture and marrying it to the sweet slickness of classic American R&B, AlunaGeorge are fast becoming an unstoppable force with a fresh, unique sound that has captured the attention of critics and fans alike. The next offering from this compelling duo is a re-release of their debut single 'You Know You Like It', which returns on July 22 - a week before their anticipated debut album 'Body Music'.

The lo-budget, DIY video for 'You Know You Like It' spread virally throughout last summer to ensure everyone who's anyone saw the incredible potential oozing form this fresh UK duo. That video has now clocked up in excess on 2 million views and we're now kicking off with a brand new video, contrasting from old to new, the band are now in full colour. 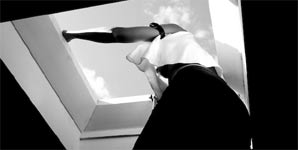