The actress thinks the series' final episode was a "slap in the face" to fans.

Back in 2014, hit TV series 'How I Met Your Mother' came to an end, with the show's final episode completely dividing audiences based on whether or not it was good enough for the loyal fan base. Now, actress Alyson Hannigan - who played Lily Aldrin throughout the show's 208 episodes - has admitted that there were some major problems with the series' finale. Alyson Hannigan starred as Lily Aldrin in the show

In the finale, viewers discovered that the mother of Ted Mosby's (Josh Radnor) children was actually dead, but were shocked and disappointed that such a small amount of time was spent with the titular Mother before she passed. Ted then went on to get with his on-off girlfriend Robin Scherbatsky, played by Cobie Smulders. 'How I Met Your Mother' was hugely popular with fans

She also complained about the finale's length and abrupt ending, adding: "It just seemed too quick. Obviously it was a tear-jerker, but with all the stuff that got cut out it was too fast. You're just like, 'Wait, what happened?!'

"There was a funeral scene [that got cut], and all this stuff that I think the audience needed. They needed that time to process that information, instead of having it slap them in the face."

Though the comments will likely do nothing to ease the pangs of pain those who felt wronged by the finale still feel, it will come as a welcome sign that one of the series' leading cast members is aware of just how badly a lot of people took the show's final outing.

More: Alyson Hannigan Forced Herself To Wait Before Getting Married

With new spinoff 'How I Met Your Father' in the works, we'll bring you all the news on the series as we get it. 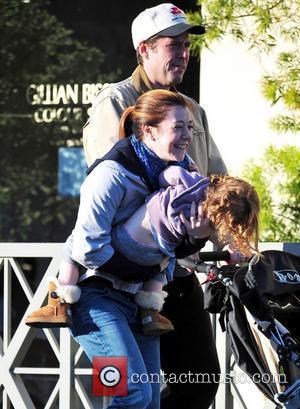