Actress Alyssa Milano Grew Emotional Speaking About Her Former Who's The Boss? Co-star Danny Pintauro's Recent Hiv-positive Confession, Calling Him A "Beacon Of Light" For Others Living With The Virus. 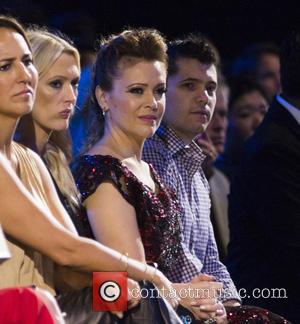 The former child actor appeared on U.S. show Oprah: Where Are They Now? on Saturday (26Sep15), publicly confessing he has battled a crystal meth addiction and was diagnosed with HIV in 2003.

Milano, who played his on-screen sister in the beloved sitcom, served as a guest co-host on chat show The Talk on Tuesday (29Sep15), speaking about Pintauro's reveal for the first time.

"I hate that it took him so long to feel comfortable, but I'm so glad that he is able to express himself now," Milano said with tears streaming down her face. "I guarantee you he will change so many lives. And I'm so grateful that this disease is being discussed again because it feels like there was such a long time that it wasn't. He is a beacon of light and he will be. I'm proud."

While Pintauro told Oprah Winfrey their other co-stars Tony Danza and Judith Light had known for a while about his condition prior to his TV interview, Milano admitted she had "no idea" until she watched the special.

"Danny and I didn't talk for many years after the show was over because when the show ended, it was a different time," Milano said. "We didn't have cell phones or Facebook, So I would've been calling his parents house being like, 'Hi, can I talk to Danny?' So I lost contact with him. This was the first that I had heard it. He's very brave."

Milano was 20 while Pintauro was 16 years old when Who's The Boss? ended its eight season-run in 1992.