Alyssa Milano wants to lose 10 more pounds despite losing 45 pounds since giving birth to her first child, Milo, in August 2011. 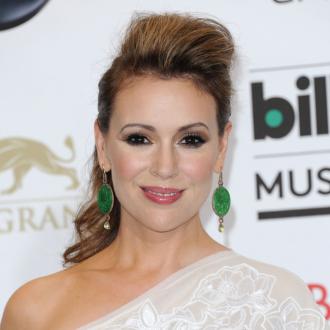 The 41-year-old actress, who gave birth to her son, Milo, with her husband David Bugliari in August 2011, hasn't lost of all the weight she gained during her first pregnancy but is trying not to let the pressures of Hollywood get to her.

The 'Mistresses' star told Mario Lopez 'Extra': ''I gained 55 pounds when I was pregnant, I still have 10 more to lose.''

The brunette beauty, who shot to fame on 'Who's the Boss' when she was 11 years old, was recently forced to defend her figure after being insulted by 'Suburgatory' star Jay Mohr during a radio interview, in which he said: ''It seems like she had a baby and said, 'I don't really give a s**t'.... I read it on her gut.''

Alyssa was very hurt after reading the insult on Christmas Day.

She explained: ''Well, he made a comment that was not so nice about my weight and I called him out on Twitter about it. I just think he was trying to make a joke and not think about it.

''I heard it actually on Christmas Day and it hurt me, I was affected by it and I wanted to remind him that I'm a human being and that this hurts.''

She added: ''I think it's an interesting statement about where we are socially that people feel that they can sort of rip a woman's body apart after having a baby. I don't think it's fair.''