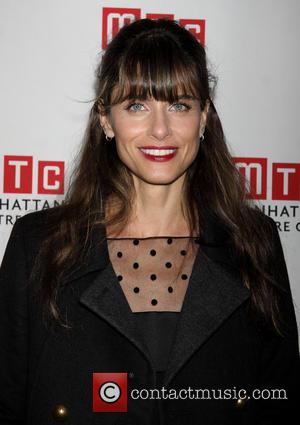 Picture: Amanda Peet - Opening night after party for the MTC production of The Commons of Pensacola, held at Brasserie 8 1/2 restaurant - Arrivals. -...

Actress Amanda Peet has won positive reviews for her debut as a playwright after launching new Off Broadway drama The Commons Of Pensacola with Sarah Jessica Parker and Blythe Danner in the lead roles.

The Something's Gotta Give star reunited Danner and Parker, who previously co-starred in a 1995 stage production of Sylvia, to play mother and daughter in the show, about a woman struggling to make ends meet after her financier husband is jailed.

The play opened at the Manhattan Theatre Club on Thursday night (21Nov13) and it appears to have won over the majority of New York's notoriously-tough critics.

The Hollywood Reporter's David Rooney echoes Isherwood's sentiments, branding the play "a pleasing debut", while a writer for Variety suggests the drama "isn't half bad in the hands of a superb cast" and a reviewer for New York Magazine's Vulture.com blog declares it "worthy of attention".

Parker, who portrays the daughter of the disgraced financier, is praised by Rooney as seeming "right at home" in her first Big Apple stage role in 12 years, and Britain's Independent newspaper critic applauds the actress for delivering a "captivating performance as the broken scion".

However, not everyone was impressed with The Commons of Pensacola - the New York Daily News' Joe Dziemianowicz claims Parker's performance can't save Peet's "unfocused" play, which he rated with just two stars out of a possible five.

The Commons of Pensacola runs until 26 January (14).