Actress Amanda Peet Was So Upset When Kit Harington's Game Of Thrones Character Jon Snow Was Killed In The Most Recent Season Finale, She Threatened To Divorce Her Husband, The Drama's Co-creator And Executive Producer David Benioff. 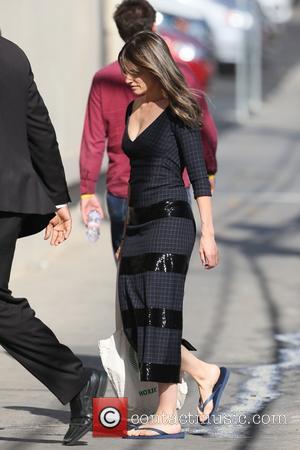 Like many fans of the show, the Something's Gotta Give star was stunned when leading man Harington was left for dead and admits her husband gave her absolutely no warning.

Peet admits she was more shocked than most fans because her husband assured her rumours surrounding the fate of Harington's character following reports the Brit had chopped off his long hair were not true.

She explains, "I made him promise me, I begged him... He went out with Kit two weeks before the finale. I said, 'I heard all this stuff; he got a haircut. What's going on? I don't wanna divorce you...' And he (Benioff) said, 'Well, I'm with him right now'. So I said, 'Well then, send me a picture. I wanna see the hair', so he sent me a picture and his hair looked normal.

"It was like my whole marriage blossomed again. David got laid... and then two episodes later... I said, 'Don't do that... because Jon Snow is my dude and I don't wanna stay married to you if you do that'."

Peet admits her secretive husband rarely opens up about the plot of Game of Thrones: "It's a bit like being married to someone in the CIA or something, except for not as important.

"He's in the bed (next to me) and he has his earphones and we angle the computer so that I can't see the dailies (raw footage)."