Amanda Seyfried Dating Justin Long: According To Sources They're "Inseparable"

Amanda Seyfried is dating actor Justin Long, according to reports on a US entertainment website. The couple were spotted together at the July 30th premiere of 'Lovelace', Seyfried's latest film.

Amanda Seyfried is allegedly dating actor Justin Long. Sources, speaking to US Weekly, say the couple were seen together at the Lovelace premiere, the recently released film in which Seyfried stars. The source, who was allegedly at the premiere, said "they weren't making out or anything like that, but they were just inseparable during the event. He hung out when she talked with others" and that "Justin stayed close to Amanda all night." Amanda Seyfried at a screening of Lovelace held at the May Fair Hotel in London.

It is not certain how the couple met but a source told US that "they recently started hanging out more, going on date-like activities." However, the source added "they're both busy, but they're seeing where it goes."

Long may have hinted at their flourishing relationship on Twitter. Tweeting on Sunday (11th August), he told his followers to go see Lovelace as "adjectives don't do justice to Amanda Seyfried's performance."

The Lovelace star dated Dominic Cooper, who she starred opposite in Mamma Mia, for over three years. The couple split up in 2010 but remain close friends. In an interview with Elle, Seyfried said "he'll [Cooper] always be in my life regardless of what his girlfriends or future wife think." She continued by saying she would never sacrifice their friendship for the sake of a boyfriend's jealous: "I'm never going to be with a guy that can't deal with my friendship with him." Since her split, Seyfried has been linked to Desmond Harrington, who stars in Dexter as Joseph Quinn. It is believed their relationship began last summer but has been over for some time.

Whilst Long was in a relationship with Drew Barrymore between 2007-2007 and then again in 2010. He tends to shy away from the public eye and does not discuss his private life in interviews; a source described him as "super private".

See Amanda Seyfried in Lovelace, out in the US now, it is due to be released in the UK on August 23rd. Justin Long at the New York premiere of The Performers. Dominic Cooper at the premiere of Summer in February in London. 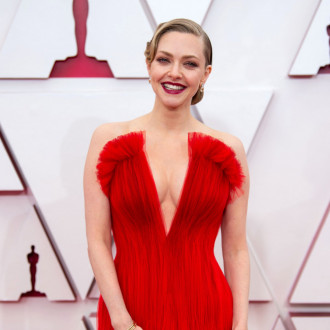