Amanda Seyfried admits she loved getting up close and personal with Justin Timberlake in their forthcoming movie 'In Time'. 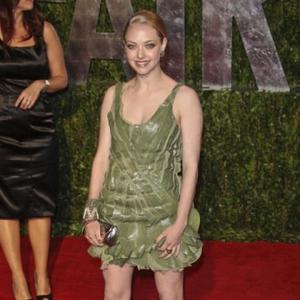 The 'Mamma Mia!' actress - who has previously dated Dominic Cooper and Ryan Phillippe - enjoyed getting raunchy with Justin Timberlake in film 'In Time' and found it "easy" to express herself in front of him.

She said: "Sex scenes are great. A lot of my co-stars have been sexy guys my age, and so, why not? I'm not going to pretend it's not fun. Justin was great - he had come from doing 'Friends With Benefits', where he basically had sex every day at work - and so it was easy for both of us."

The 25-year-old beauty doesn't even mind getting close to her female co-stars, as she did with Megan Fox in 'Jennifer's Body', and she thought their kissing scene in the film was "really sexy" and "special".

She told W Magazine: "'Jennifer's Body is my favourite movie that I've done. It was overlooked in theatres, but it does have a DVD following. I can't believe nobody wanted to see Megan Fox and me hitting it. They had an extreme close-up of our tongues, and I'm telling you, the thing about the scene is that it's actually really sexy.

"For a young girl to say that about her own sex scene-it must be because it's special. I think Megan and I kissed really well together. We have similar kissing styles and it worked. We got it done for the masses, and the masses still didn't show up."