Amber Heard has praised Johnny Depp as a ''wonderful, special person'' and says he ''lights up a room''. 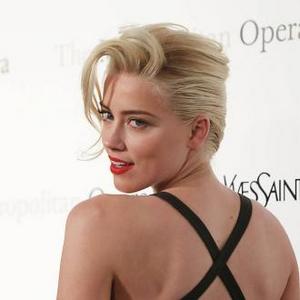 The 26-year-old beauty - who stars alongside the newly single actor in 'The Rum Diary' - has described the 'Pirates Of The Caribbean' star as a ''wonderful, special person''.

Speaking about Johnny - who split with Vanessa Paradis, his partner of 14 years, earlier this month - she is quoted by The Sun newspaper as saying: ''He lights up a room.

''He looks even better close up. Johnny is a wonderful, special person.''

Johnny is said to have hand-picked Amber to play the love interest of his character Paul Kemp, a journalist for The San Juan Star, in the 1999 romantic-comedy movie, and she recently revealed the pair have remained friends since the film.

Amber previously said: ''I auditioned four times and was told that Johnny would make the final choice. We've stayed friends, because that's the kind of man he is.''

The blonde beauty is said to have visited Johnny on the set of his new movie 'The Lone Ranger' in New Mexico.