Actress America Ferrera Has Penned An Open "Thank You" Letter To Donald Trump Following His Ill-advised Remarks About Mexicans In The U.s., Suggesting He Inadvertently Inspired More Latinos To Vote. 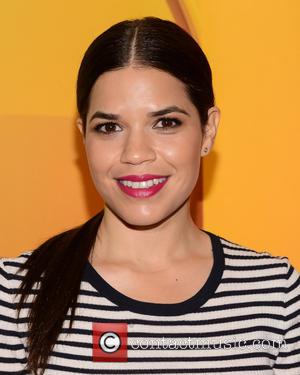 The real estate mogul and TV personality has been under fire ever since he announced his bid for U.S. president last month (Jun15) with a speech, in which he suggested Mexicans in America were "rapists" who brought drugs and crime into the country.

And now the former Ugly Betty star and outspoken activist has decided to sarcastically offer her gratitude to Trump in a missive posted on Huffington Post Latino Voices.

She writes, "Dear Donald, You've said some pretty offensive things about Latino immigrants recently, and I think they're worth addressing. Because, you know, this is the United States of America, where I have a right to speak up even if I'm not a billionaire. Isn't that awesome?

"While your comments are incredibly ignorant and racist, I don't want to spend my time chastising you... Instead, I'm writing to say thank you! You see, what you just did with your straight talk was send more Latino voters to the polls than several registration rallies combined! Thank you for that.

"Here we are pounding the pavement to get American Latinos to the polls, while your tactic proves most effective. Remarks like yours will serve brilliantly to energize Latino voters and increase turnout on election day against you and any other candidate who runs on a platform of hateful rhetoric."

She continues, "Do you know why that's such a big deal, Donald? Because Latinos are the largest, youngest and fastest-growing constituency in the United States of America... This is the America we are actually living in. I hope by now you understand that without the Latino vote, there is no chance of you ever winning this election. If you don't believe me, you could ask President Bush or you could even ask President Obama.

"You, Mr. Trump, are living in an outdated fantasy of a bigoted America... Your negativity and your poorly thought out speech ignited a fire in our community... Thank you for reminding us that there remains an antiquated and endangered species of bigots in this country that we must continue to combat. Thank you for reminding us to not sit complacently at home on election day, but to run to the polls and proclaim that there is no place for your brand of racial politicking in our government. Thank you for sending out the rallying cry.

"The truth is, Mr. Trump, that your comments mean that you fail to see that immigrants are what have made this nation. They are at the core of our ideals, and they are the foundation that keeps us afloat. No, Mr. Trump, you may not reduce us to drug dealers and rapists. We are moms and dads, sons and daughters. We are valedictorians and honor students. We are college graduates, bankers, police officers, entertainers, teachers, journalists, politicians and we are the future of America."