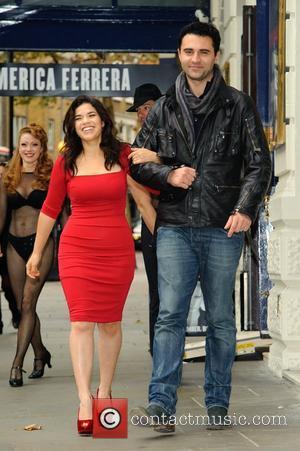 Actress America Ferrera "aches every day" as she tackles tough training for her lead role in West End musical Chicago.
The Ugly Betty star spends up to seven hours a day preparing to play sexy showgirl Roxie Hart in the London production, but she's enjoying getting into character for her dream role.
She tells Britain's Evening Standard newspaper, "Roxy definitely brings out the crazy sex kitten in everyone. It's fun to get to live in that place and be driven by gut and emotions and desire and whatever she wants at the moment.
"I will be doing the biggest thing I have ever wanted to do in London. There is such a history of theatre and plays and playwrights in London and it's the motherland for actresses if you like, it's where our history began in theatre.
"This is a little bit like boot camp for me. I would say there's a part (of my body) that aches every day, a different part every day."
Ferrera will make her debut in the show at London's Garrick Theatre on Monday night (07Nov11).