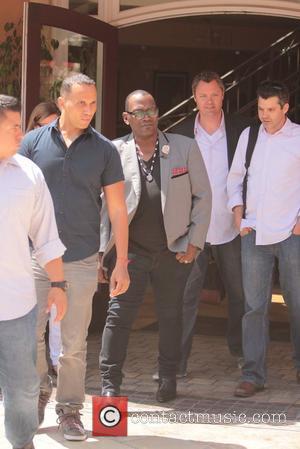 Picture: 'American Idol' judge Randy Jackson appears on the entertainment news show 'extra' to promote his line of watches, Timepieces By Randy Jackson at The Grove...

As American Idol reached the stage in which it sends its finalists back to their roots so that the locality can see what huge stars they're becoming, Jessica Sanchez looked utterly delighted to be back at her home spot of Chula Vista, and they looked thrilled to see her - the 16 year-old getting a huge ovation as she performed at Eastlake High School Stadium having been transported there via town through a car.

"I feel amazing," Sanchez, 16, said as she made her way to the stadium's stage. "I'm so happy to represent Chula Vista. It was the people. I missed the people so much. I love you guys. Thank you for all the support." Sanchez went on to sing four songs, including a cover of Whitney Houston's 'I Will Always Love You.' A following performance at the USS Midway Museum was more emotional, according to People magazine, with her father joining her on stage to sing a rendition of Luther Vandross' 'Dance With My Father.' Her dad is being deployed to Singapore as a member of the US Navy.

Elsewhere, Joshua Ledet was wowing fans in his home town of Westlake, Los Angeles, whilst Phillip Phillips performed to thousands in South Georgia, being given a key to the city to boot. Although there can only be one winner this weekend, there's no denying that all three look likely to be stars of the future.