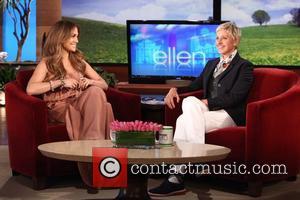 Picture: 'American Idol' judge Jennifer Lopez makes an appearance on NBC's 'The Ellen DeGeneres Show'. Ellen talks with Jennifer about going on a world tour with...

SCOTT MCCREERY, the 17-year-old American Idol contestant, won the coin toss to decide who will sing first in next week's grand finale, but allowed LAUREN ALAINA to choose the order, reports USA Today. The post-show coin toss fell in the favour of SCOTT MCCREERY, but it was Alaina who chose to sing second.
The pair were still absorbing their status as American Idol finalists when they were asked to toss a coin to decide next week's order. Despite getting the opportunity to sing in the favourable 'second' slot, MCCreery instead gave Alaina the chance to choose. History suggests that the contestant singing second in the final is more likely to triumph given that they perform just minutes before the viewer vote. Speaking shortly after making it through to the final at the expense of Haley Reinhart, Alaina said, "I felt like I was going to pass out. I was crossing my fingers and praying Ryan Seacrest was going to call out my name. I feel so blessed to be here, I cannot believe it". Scotty found it more difficult to sum up his feelings, saying, "I had so many emotions going through my head. There have been so many thoughts coming through my head this whole competition", adding, "It's just been a crazy ride. Many had expected Haley Reinhart to reach next week's final, with some commentators comparing her exit to the shock elimination of Pia Toscano earlier in the series.
SCOTTY MCCREERY is now the big favourite to scoop the title during next week's grand finale. The country sensation has received universal praise from the judges since week one of American Idol season 10.