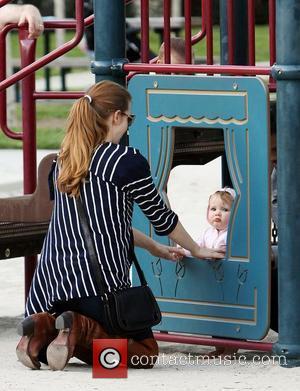 Picture: Amy Adams and her daughter Aviana spend the afternoon at a park Beverly Hills, California - 09.03.11

Oscar nominee Amy Adams will steal the heart of new Superman Henry Cavill after landing the role of Lois Lane in the upcoming reboot of the comic book franchise.
The Fighter star learned she would be putting on her reporter's hat on Sunday (27Mar11) after receiving the good news from director Zack Snyder.
The filmmaker admits it was no easy task casting the highly-coveted part - but he knew Adams was the one from the moment he saw her.
He tells the Los Angeles Times, "There was a big, giant search for Lois. For us it was a big thing and obviously a really important role. We did a lot of auditioning but we had this meeting with Amy Adams and after that I just felt she was perfect for it.”
The actress is the latest big name to join Snyder's new project - Kevin Costner and Diane Lane were recently confirmed to play Superman's parents.