Actress Amy Landecker Was Left Shocked When Her Transparent Co-star Melora Hardin Kissed Her Breast During A Lesbian Sex Scene. 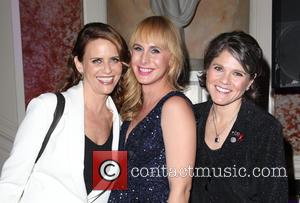 Landecker did not set boundaries before filming the lovemaking scene because she didn't think her co-star would go so far.

She says, "I was fairly comfortable with Melora, she's an amazing woman and I have a natural chemistry with her, but we're both actually not lesbians as far as I know.

"I literally did not think that was on the menu. I'm like, 'That's not what I considered an option', and then of course I'm like, 'Oh yeah, I guess that's an option'. I freaked out a little..."

Hardin adds, "I was just being (my character) Tammy and Tammy wants her so bad..." When one teenager discovers his father's old camera, a video of his seventh party is...