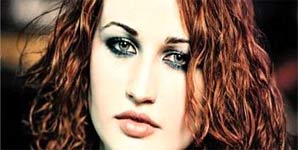 Landing inside the top ten with her pop-rock single 'Misfit', Amy Studt was perceived as a possible British answer to Avril Lavigne back in 2003. Unlike the Canadian, she failed to continually deliver hits and was dropped by her label, despite selling 200,000 copies of her debut album 'False Smiles'. She now returns, having toured with Razorlight under the alias of 'Jane Wails'.

Any fans of Studt who have been waiting for this comeback may be in for something of a shock; put simply this is not the same artist who was a teen star. Introduced with a hypnotic piano melody, 'Sad Sad World' opens the record in brooding fashion, before Studt unleashes a vitriolic outburst. 'She Ran' is a very grand number full of attitude and a thunderous orchestra and well-utilised strings, perhaps raising expectations too much as it is the highlight of the album. With the 'mature' direction seemingly working well, proceedings dive on the fragile 'Furniture', which tries too hard to be all grown up, while 'She Walks Beautiful' is an Evanescence song without the crunching chords, which either way doesn't really impress.

The closest Studt comes to her previous incarnation is on 'Chasing The Light', which features an angsty chorus that is misplaced with the rest of the track. 'Nice Boys' is a complete change in tone, bordering on jovial and on which the artist sounds similar to Kate Nash, but it isn't enjoyable as far as pop music goes. By the time the final ballad of 'Here Lies Love' spins round, it's difficult to still maintain an interest, which is a shame considering the promising start and the fact that Studt does have a decent voice.

Amy Studt - My Paper Made Men