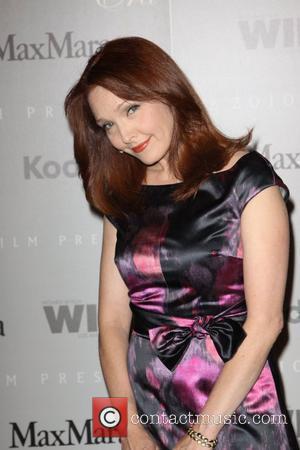 Actress Amy Yasbeck fought back tears during an emotional U.S. TV interview on Tuesday (14Sep10), as she relived the heartbreak of losing her husband, actor John Ritter, in 2003.
The beloved Three's Company star was 54 when he died from an undiagnosed aortic dissection on 11 September, 2003 - the same day as their daughter Stella's fifth birthday.
Yasbeck relives the memories the family shared in new memoir With Love and Laughter, John Ritter - the book she was promoting on pals Whoopi Goldberg and Barbara Walters' U.S. chat show The View on Tuesday (14Sep10) when she started sobbing.
Speaking to Walters, she said, "I don't even have to say anything, I cry just looking at you... I know that you knew John."
The widow went on to describe the book as a "love letter, from me to Stella and from John to Stella," adding, "I wanted to put it down for her to see, and I did."