Andrew Garfield was attracted to Emma Stone from the very first screen test they did together for 'The Amazing Spider Man'. 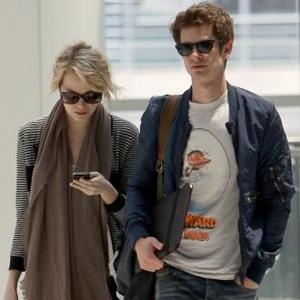 Andrew Garfield was attracted to Emma Stone from the very first screen test they did together.

The actors met auditioning for the male and female lead roles in 'The Amazing Spider Man' - which they both eventually won - and are now dating in real life, and Andrew puts it all down to the chemistry between them.

He told MTV: ''We got on really well as people, in between takes. That was the fun stuff. In between, we'd just mess around, and I felt, 'Ah, this is different.' I wasn't really aware what was happening in the screen test.

''She keeps you on your toes, and that wakes you up. That was the beginning.

''Obviously I was so happy that she got the role and decided to do it.''

Andrew, 28, added being around Emma, 23, on set helped him relate to his character - Peter Parker - as well as making him look forward to their romantic scenes together.

He added: ''Those are The Days I'd look forward to, you know? For Peter as well, because Peter goes through some horrible stuff in the movie.

''There's some joy to be had when experiencing his first love.''

'The Amazing Spider Man' is set for release in July.