Stars Out In Force For Jesus Christ Superstar's Broadway Return 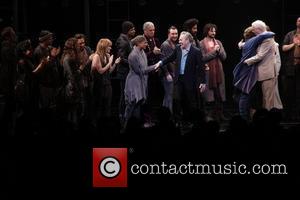 The stars were out in force last night for the revival of Jesus Christ Superstar on Broadway (March 23, 2012). The 1971 musical, written by Lord Andrew Lloyd Webber and Tim Rice has enjoyed something of a renaissance in recent years and in response to that, the musical has been revived on Broadway, for old and new fans alike. Last night's debut turned out to be a star-studded affair, with the show's creators being joined in the audience by Edie Falco, MATTHEW WARCUS and Eddie Izzard.

Lloyd-Webber, 67 told reporters that he had never really been happy with the show until this current performance, the Evening Standard reports today. "I've never really been happy with it before ... now it's right," said the musical theatre legend. After the show, he thanked the actors and the orchestra for a "fantastic night" and added "It's a fun evening and a fun production. It's good to be here."

Despite being written four decades ago, the musical, which is loosely based on the last week of Jesus' life, has seen a surge in popularity in recent years. The appeal of the show was described by the director Des MCAnuff, who explained "People are really responding to this work. The excitement starts before the orchestra even plays. Andrew Lloyd Webber and Tim Rice have a lot of respect this season. For a long time ... Superstar felt too close but people are recognising that this is a classic to go into the future" When it originally opened in London in 1972, it ran for eight years, making it the longest-running West End Show at the time.