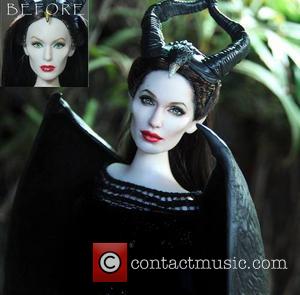 Picture: Angelina Jolie and Maleficent - Accomplishing this feat requires many photos of the famous person/character, plenty of time, and a great deal of skill... something...

Angelina Jolie knew she had found someone special in acting newcomer Jack O'Connell after locking him in a dark cell and beating him as part of the tough audition process for her new prisoner of war drama, Unbroken.

The Brit portrays Olympic runner-turned-war hero Louis Zamperini in the new biopic, and Jolie admits she was blown away by his raw emotion as she watched him react to spending time in isolation to test his might.

Speaking at the Hollywood Film Awards on Friday (14Nov14), she explained, "The auditions were very intense, and none more so than the cell. In the cell, the actors would be confined, not knowing if he would be there for three minutes or an hour. A crewmember with a rubber baton would go in at unexpected times and hit the actor. It didn't hurt, but the feeling would bring up the emotion of the loss of freedom, the control, the never knowing, the sense of powerlessness.

"All of the actors were so brave and many of the auditions were emotional and heartbreaking, and then came Jack. He went in the cell, he sat in the dark, he didn't force anything, he didn't act. He was just present. He looked around the darkness, he felt the isolation, and he looked so young and vulnerable, and when he was hit, he took the beating, he ended up shaking from the feelings and he allowed his emotions to come forward. The second time he begged the guard to stop with tears in his eyes. And the third time, something happened. His eyes changed and he went against the script. And when the guard came in, he fought back. He just couldn't stay down.

"I showed that audition tape to Louis, and he smiled. As a director, to have Jack in front of your lens is a gift. He draws you in, he makes every moment honest. In his work, he gives all that he has..."

As she introduced the actor as the recipient of the New Hollywood prize, she smiled and showed off her regional English accent, saying, "It is my privilege to present the New Hollywood award to the least Hollywood artist I know, straight from Derby, 'Ey up mi duck (sic)!' Jack O'Connell."

The amused actor responded by opening his acceptance speech with the common greeting, "Ey up mi ducks (sic)!", before turning serious to honour Zamperini, who died in July (14).

He told the star-studded audience, "I'd like to pay a tribute to the unfortunately late Mr. Louis Zamperini, whose life account of tremendous strength (and) courage carved a history, like many others of his generation, a history that we strived to tribute in our film, Unbroken.

"I'd like to dedicate this aware therefore to Mr. Louis Zamperini."

Turning to Jolie, he added, "My esteemed boss, and good friend, her ladyship, whose unconditional support and dedicated leadership, meant that I was capable of portraying our hero, under her captaincy, so Angelina, thank you."