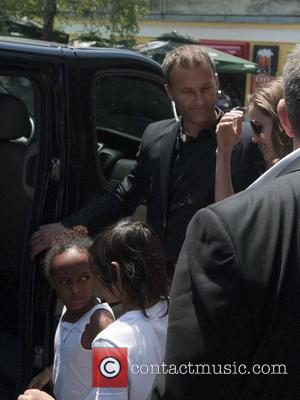 Angelina Jolie and Brad Pitt's daughter Vivienne has landed her first acting role. It seems as though the four year old will be following in mummy and daddy's footsteps and is set to star in Maleficent. She hasn't quite reached the heady heights of 'lead actress' just yet; that honor will go to her mother, in this instance, but she has been cast as a young Princess Aurora, after her mum decided that she would be perfect for the part.
The Sun reports that the movie, which focuses on the character of Sleeping Beauty's evil nemesis (played by Angelina) Maleficent will be shot in England before being released next summer (2013). A source told the British newspaper "Ange thought it would be a fun experience for her and Viv to share and Viv is a natural." With six kids in their brood, it's natural that a spot of jealousy will occur, with Viv being the first to get their own film role. "The other kids are now nagging Ange and Brad to land them roles," said the source. The movie will also star Sam Riley, Juno Temple and Miranda Richardson. The older version of Princess Aurora will be played by Elle Fanning.
Recently, Angelina and Brad sparked rumors that they were getting married, when they hosted a family party at their home in France. It turned out to be a false alarm however, and we're still awaiting news of the actual wedding date.