Former Ac/dc Drummer Phil Rudd Has Promised Fans He'll Be Back With The Rock Act Once He Has Taken Care Of His Legal Woes. 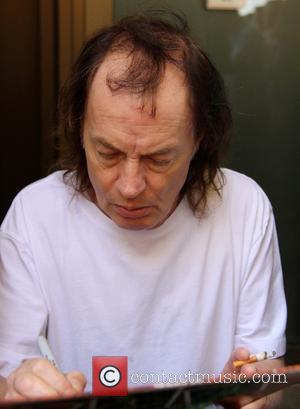 Picture: Angus Young - Angus Young of AC/DC and his bodyguard are mobbed by fans after a city stroll. - Duesseldorf, Germany - Saturday 11th July...

In his first sit down TV interview since he was convicted of drug possession and threatening to kill and handed a home detention stint, Rudd appeared on New Zealand's 3D news show on Sunday (09Aug15) and expressed his desire to return to AC DC once his eight-month sentence ends.

The drummer's AC DC bandmates were forced to find a replacement for Rudd as they prepared for their ongoing Rock of Bust tour after he was initially arrested for reportedly hiring a hitman to kill an associate.

Angus Young and his group pals recruited their one-time drummer Chris Slade to tour with them.

Of his 'stand-in', Rudd said, "Chris Slade's a good drummer but I've got no idea what he's doing up there... I got nothing against Chris. It's just he hasn't got a permanent job. I hope! That's all."

He's hoping his former bandmates call on his services when they perform shows in his native New Zealand in December (15), but he admits he hasn't heard anything about a Christmas reunion.

"I've realised who I am and what I can do and I just want a chance to go out there and show everyone who the man is. I'm the man..."

"I've grown up, but not grown old. I hope there's a difference. I still want to play the drums. I've got a lot of game left and I reckon I'm just starting to f**king get cleared up. So I just want a chance to get back in with the boys and just carry on from there."

Rudd also addressed the drama the led to his arrest last year (14), confessing his "angry phone call" came after a release party for his 2014 solo album Head Job, which he hosted at his own restaurant.

The rocker told the news show he was upset by the behaviour of many of the attendees, who showed up drunk, and threatened to end one employee's life over the boozy party.

He's still in shock that he was handed such a severe sentence, which he is appealing: "I expected to get a discharge without conviction and get on a plane and go straight back to f**king work."

As for the drug possession charge, defiant Rudd added, "I'm getting help from Dr. Bird – the country's most prominent psychiatrist. I was born with an imbalance, you know. I suffer anxiety and a lot of insecurities, depression and stuff."