Anna Nicole Smith's bodyguard witnessed the late model's lawyer boyfriend HOWARD K. STERN supply the star with drugs in the months before she died from an accidental overdose, a court has heard.
Stern is currently on trial in California, along with doctors Khristine Eroshevich and Sandeep Kapoor, accused of conspiring to provide Smith with strong prescription pills in the run-up to her death in 2007. They are also accused of using a variety of false names to obtain the drugs for the late star.
Her security guard Maurice Brighthaupt testified in a Los Angeles court on Friday (06Aug10), describing how Smith would pop 20 pills at a time, including anxiety medication Valium.
He told how he witnessed Stern occasionally hand her drugs from a container kept by her bedside, reports the Associated Press.
The bodyguard revealed how Smith spiralled into a severe depression aided by drugs following the death of her son Daniel in 2006.
He also testified that Smith's psychiatrist, Eroshevich, flew from Los Angeles to the Bahamas, where the model lived, to bring her prescription medication. He claimed he once saw Smith drink from a bottle of powerful sleeping aid chloral hydrate, which had allegedly been brought to the star by Eroshevich.
Brighthaupt, a former firefighter and paramedic, admitted the busty blonde used drugs almost from the start of his employment in 2003, saying, "Anna had a bag of meds she would take with her."
But Brighthaupt insisted he would frequently urge his boss not to take so many pills: "That was my job - to protect her from herself."
All three defendants have pleaded not guilty to the charges.
Smith died in a Florida hotel room in February 2007.
The trial continues. 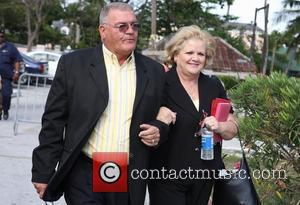