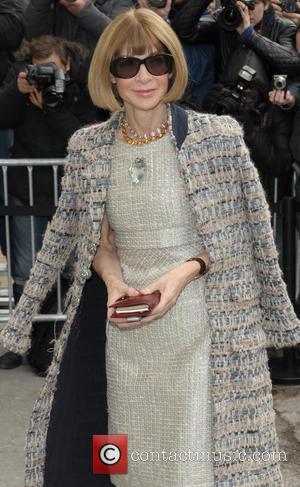 Vogue editor-in-chief Anna Wintour has defended her decision to put Kanye West and his reality Tv star fiancee Kim Kardashian on the cover of the fashion bible.

The celebrity couple graces the front of the upcoming April (14) edition of the magazine, with Kardashian wearing what appears to be a designer wedding down as her rapper fiance hugs her from behind.

Rumours suggested Wintour had been cornered into giving the socialite the honour of becoming a Vogue cover star by West, who had previously ranted about Kardashian's lack of coverage by the prestigious publication.

In October (13), he argued, "There's no way Kim Kardashian shouldn't be on the cover of Vogue. She's like the most intriguing woman right now. She's got (veteran U.S. newswoman) Barbara Walters calling her like everyday... and collectively we're the most influential with clothing."

However, Wintour, who also serves as the creative director of Vogue publishers Conde Nast, insists the decision was made solely in-house.

In the editor's letter of the April issue, Wintour writes, "Part of the pleasure of editing Vogue, one that lies in a long tradition of this magazine, is being able to feature those who define the culture at any given moment, who stir things up, whose presence in the world shapes the way it looks and influences the way we see it.

"I think we can all agree on the fact that that role is currently being played by Kim and Kanye to a T. (Or perhaps that should be to a K?).

"As for the cover, my opinion is that it is both charming and touching, and it was, I should add, entirely our idea to do it; you may have read that Kanye begged me to put his fiancee on Vogue's cover. He did nothing of the sort.

"Kanye is an amazing performer and cultural provocateur, while Kim, through her strength of character, has created a place for herself in the glare of the world's spotlight, and it takes real guts to do that."

But not everyone is a fan of the cover - actress Sarah Michelle Gellar voiced her opposition via Twitter.com, writing, "Well... I guess I'm canceling my Vogue subscription. Who is with me???"