Anna Wintour is reportedly in negotiations to write her autobiography and is said to be interviewing writers to help her tackle the book. 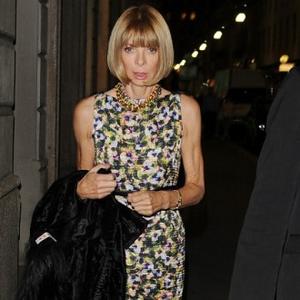 Anna Wintour is reportedly preparing to pen her memoirs.

The legendary US Vogue editor - who has been at the helm of The Fashion publication for 23 years - has been interviewing authors to collaborate on the project, the New York Post reports.

According to insiders, Vogue's fashion news director Mark Holgate is at the forefront of those who could assist on the book.

However, a spokesperson for the magazine said it is "absolutely not true" that Anna is seeking publishers for a planned memoir.

The editor - who was presented with an OBE by Queen Elizabeth in 2008 - received the Chevalier of the Order, the highest honour that can be given in France.

Among the guests at the ceremony were CHANEL designer Karl Lagerfeld - who designed the couture suit she wore to accept the honour - Stefano Pilati, Donatella Versace, Tommy Hilfiger, Alber Elbaz, Franca Sozzani and Riccardo Tisci.

Speaking about the ceremony, Karl said: "We had this very nice cocktail, where Anna made a very funny speech."