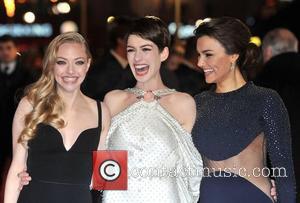 Anne Hathaway is back on the town and back to her stylish self after undergoing a massive transformation for her latest role as Fantine in Les Miserables, having been spotted around the nightspots of London shortly after arriving in the city.

Hathaway has made a series of appearances in the English capital since she flew in to promote the new film earlier this week, and it looks as though the actress was more than happy to finally be back on the town following her rigorous weigh-loss campaign for her role in Les Miserables. The actress dropped a further 25lbs from her already slim figure to get ready for her dramatic role as the Fantine, which involves her having to sell her hair and body in order to survive during the French revolution.

Anne and her fellow co-stars, including Amanda Seyfried, Russell Crowe and Hugh Jackman, were in the capital for the world premiere on Wednesday (Dec 5) night, with Anne out for a meal with a male friend the following night looking seriously glamourous once again. Despite having to go down to her super-slim size, the dedication may pay off come February, with bookies making her one of the favourites to take home the Best Actress Oscar next year. That said, she still has stiff competition from the likes of Jennifer Lawrence (Silver Linings Playbook) and Sally Field (Lincoln).