Anne Hathaway certainly turned heads at the Met Ball 2013, which had a punk theme. 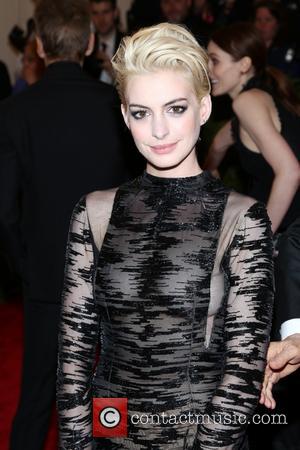 Anne Hathaway turned heads at the Met Ball 2013 over the weekend, sporting bleached blonde hair! The Hollywood actress certainly embraced the Punk theme of the evening with her dramatic new hair and lacy Valentino dress. Hathaway also opted for heavy eye make-up, a black clutch bag and bright yellow nails. Scottish star Gerard Butler barely recognised the actress when they bumped into each other on the red-carpet.

The Oscar winner wasn't the only celebrity to opt for a dramatic look for the PUNK: Chaos to Couture event, with designer Nicole Richie turning heads with an eccentric silver hairstyle and gothic ensemble. The dress itself was a custom-made creation, with the 31-year-old adding blood red nails and lips and spikey earrings!

Others to undergo transformations included Madonna, Beyonce and Sienna Miller though it was Hathaway who appeared to be a favorite of the fashion journalists. The Guardian's Jess Cartner-Morley wrote of her look, "A true movie star knows how to use the red carpet to make a statement, and that's what Hathaway did in vintage Valentino. First, she turned that poor-little-me Les Mis urchin cut into something vampish and edgy by dying it Debbie Harry blonde. Second, she showed how incredible her va-va-voom body is when she's living on the Fantine diet of teaspoons of baked porridge. Third, she showed that being upstaged by her own nipples at the Oscars has in no way cowed her into making safe fashion choices. Respect."

Madonna wasn't so lucky, with Cartner-Morley writing of her outfit, "So maybe it was over-confidence, possibly it was the fishnets, perhaps the tartan. But somehow the elements conspired to make her less Givenchy more Dragon's Den." Anne Hathaway With Blonde Hair At The Met Ball 2013 Nicole Richie At The Met Ball 2013 Madonna In A Garish Outfit At The Met Ball 2013