Anne Hathaway says acting in comedies is much harder than drama. 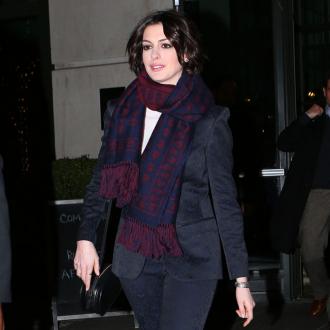 The 32-year-old actress was desperate to do something lighthearted after shooting intense scenes for Interstellar' but it was only when she began work on 'The Intern' that she remembered they weren't as much fun to work on as she expected.

She recalled: ''I was on the set of 'Interstellar' and it was the moment where [my character] Brand believes that she could be the last human being in the universe and I just had to tap into this place of fear and loneliness.

''Afterwards I went up to the producer, threw my arms around her and said, 'Oh my God, I just want to do a comedy! I need to laugh so hard, man'.

''I forgot, because it's been so long, that comedies are way harder than dramas. It's funny the first take, it's funny the second take and then you're like, 'We're here all day.'''

The 'Les Miserables' star still feels disappointed when she doesn't land roles she has auditioned for but no longer ''beats herself up'' the way she used to and tries to feel happy for the actress who has been given the part.

She told Glamour magazine: ''It's disappointing and you have a cry and give yourself a day to feel rotten about it.

''And then you have to be happy for the person that got it and think, 'I'm not going to shoot daggers at the poster whenever I see it.'

''I don't beat myself up as easily any more, I see the opportunity that exists within failure more easily now. It's great maturing.''