Anne Hathaway is ''devastated'' over the publication of photographs which show her accidentally baring her private parts at the New York premiere of 'Les Miserables' on Monday (10.12.12). 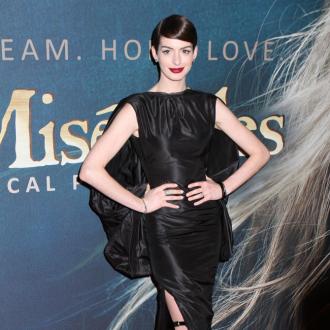 Anne Hathaway is ''devastated'' over the publication of photos which show her going 'commando'.

The 30-year-old actress was emerging from her car for the 'Les Miserables' premiere in New York City on Monday (10.12.12) when her black Tom Ford dress rode up and showed that she was wearing no underwear in front of waiting photographers.

Some of the pictures have now been published and Anne feels humiliated knowing the world has seen her private parts.

Speaking to Vanity Fair writer Ingrid Sischy at a luncheon the following day, the New York Daily News newspaper overheard her say: ''I was getting out of the car and my dress was so tight that I didn't realise until I saw all the photographer's flashes. It was devastating. They saw everything. I may as well have lifted up my skirt for them.''

Fashion experts have since come to the star's aid and offered some wise words on how to avoid a similar mishap occurring again in the future.

Alexis Bryan Morgan, executive fashion director at Lucky magazine, was ''shocked'' by the unfortunate incident as Anne - who is married to 'Dukes of Hazzard: The Beginning' star Adam Shulman - is usually so ''pulled together'' when it comes to her style and dignity.

She shared a style tip for the actress, advising: ''It's so much better to be caught in Spanx [underwear]. If you're not looking for shaping I recommend the Commando brand. It's hands down the best. It's seamless and raw cut.

''The fabric is slinky and seamless, and if your dress flies up you're not naked. Her dress had ruching, I don't know why she felt she needed to go commando.''

Anne is one of many female celebrities to be caught with no underwear one, with previous victims including troubled star Lindsay Lohan, Britney Spears and Paris Hilton.