Anne Hathaway says her fellow 'Les Miserables' actor Hugh Jackman was an inspiration and a source of strength to the entire cast on the set of the multiple Oscar-winning picture. 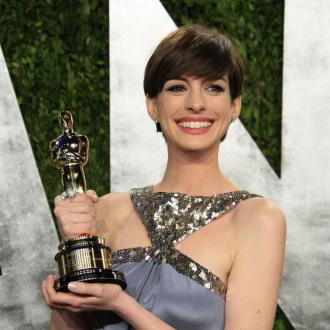 The 30-year-old star - who won the Best Supporting Actress trophy for her role as struggling prostitute Fantine at the Oscars last night (24.02.12) - says her Australian co-star was so hardworking and committed to making Tom Hooper's musical movie a success that he inspired her to put everything into her own performance.

She said: ''It wasn't hard work, but, you know, it was challenging. And we looked to him every day and to his strength and to his indefatigable spirit. He never complained once.

''He did as many takes as need be, and he was absolutely our rock and our inspiration through everything and to me personally.''

Anne jumped up to embrace Hugh upon hearing the news of her big win and believes the kind-hearted actor, who lost out on the Best Actor gong to Daniel Day-Lewis, was the ''magical'' central force of good behind the movie and the reason it is such a success.

She added in a backstage interview during the Academy Awards ceremony: ''Tom Hooper, our director, has gone on record as saying this film wouldn't have happened if Hugh Jackman didn't exist. And I know exactly why he says that. Hugh is this magical alien combination of strength and soul and heart and artistry and fun.

''And if you think about it, I mean, not to get serious, but we do live in a world that can tend toward the cynical, and to have someone in a film like this where it's inherent to the film's success that you believe in the goodness of the central character, and that someone like Hugh exists who has that goodness within him, it made the film soar.''