Anne Hathaway has reportedly postponed her wedding to fiance Adam Schulman because she wants to give her newly-cropped hair time to grow back. 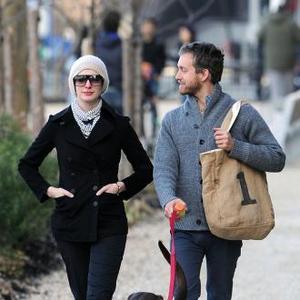 Anne Hathaway has reportedly postponed her wedding because of her newly-cropped hair.

The 29-year-old actress - who has had to lose weight and cut off her long locks to play dying prostitute Fantine in the film adaptation of 'Les Miserables' - apparently wants to wait for her hair to grow back before tying the knot with fiancÃ© Adam Schulman.

A source told the Daily Mail newspaper: ''Anne's worried there won't be time to get back in shape and grow her hair for a summer wedding.

''She also has to promote her movie Batman. They are thinking about postponing until later this year or maybe 2013.''

The couple - who started dating in 2008 following Anne's split from RAFFAELLO FOLLIERI after he pled guilty to 14 counts of money laundering, conspiracy and wire fraud - announced their engagement in November and Anne explained he ''ruined'' her plans to stay single.

She said: ''We hit if off immediately but it took us a pretty long time to get together. He thought that I had a boyfriend and I thought that he had a girlfriend, so I thought that I'd better keep my distance because I didn't want to be that girl.

''I am very much in love with him, [only] Adam totally ruined my plan. I was really actually looking forward to a little alone time, and then I fell in love like a fool!''