Anne Hathaway has admitted she would like to play Duchess Catherine in a film of her life. 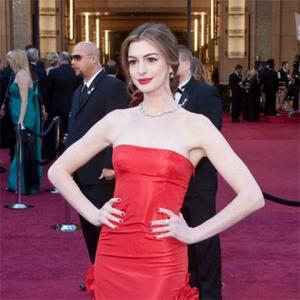 Anne Hathaway wants to play Duchess Catherine in a movie of her life.

The 28-year-old US actress is a big fan of the newest member of the British royal family - who married Prince William in April - and would happily portray her in a biopic.

Asked at the European premiere of her new movie 'One Day' whether she would play Catherine in a movie, Anne told BANG Showbiz: "I haven't really thought about it before but yes, why not. She's great."

Anne has previously spoken of her admiration for Catherine - who was previously known as Kate Middleton - for marrying William.

Speaking about watching the couple's nuptials on television, she said recently: "The moment for me was when Kate let go of her father's hand and she walked the last few feet to William. I was hanging out with my friend Chris, in London, and I didn't mean to say it out loud, but I just went, 'Oh, you're a brave girl.'

Joining Anne on the Pink carpet at the 'One Day' premiere - which was held at London's Vue Westfield cinema - were her co-star Jim Sturgess, socialite Peaches Geldof and British TV presenter Dermot O'Leary.