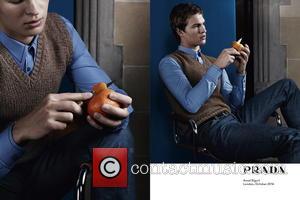 Picture: Ansel Elgort - Four of today's leading men lend their screen presence to an act of photographic forensics: Ansel Elgort (The Fault in Our Stars;...

Divergent and The Fault In Our Stars actor Ansel Elgort appears to have rekindled his romance with his high school sweetheart after the former couple was spotted together at Reagan National Airport in Washington, D.C. on Saturday (17Jan15).

Elgort split from dancer Violetta Komyshan last year (14), but the pair was all smiles at the weekend after taking a flight together.

A source tells Us Weekly, "They just missed each other. He thought his schedule was too much to have a girlfriend... He didn't really see anyone else seriously while they were split."