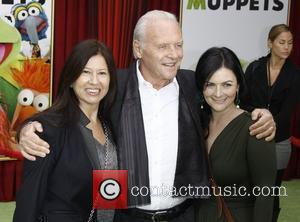 Sir Anthony Hopkins coached fellow actor Dustin Hoffman on how to avoid upsetting movie directors - and advised him to jump out of a window to escape a huge bust-up onset.
The Rain Man star was chatting to his fellow Oscar winner during the early years of his career and brought up the subject of how to inject his creative input on a film set without clashing with bosses.
Sir Anthony gave him several pointers on avoiding a heated confrontation, before telling Hoffman his secret tactic to escape from a bust-up with the director.
Hoffman says, "We were talking about what do you do when you're not getting along with a director. He said, 'Never raise your voice. Never have a fight. Wherever you're shooting, make sure you're shooting on the ground floor. When it gets to that point, you say, 'Excuse me, I have to go to the bathroom.' You checked the bathroom out earlier. It has a window. You go in the bathroom. You lock the door. You climb out the window. You go home. You come back the next day. There's no argument anymore.'