Antonio Banderas Experienced A Surreal Moment On The Set Of Trapped Miner Movie The 33 When He Found Himself Hugging One Of The Real-life Chileans Stuck Underground For 69 Days. 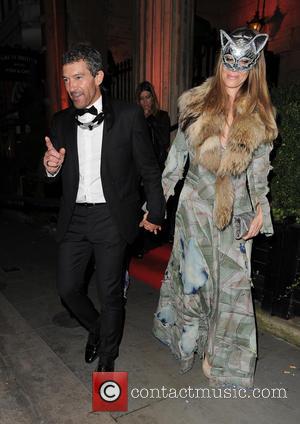 Mario Sepulveda, the real-life character the Spaniard portrays in the film, was hired as an extra for the movie, and in the scene surrounding the miner's freedom, Banderas ran to hug him.

"The day that I came out of the mine, there was a moment because we tried to reproduce it very much as it was," the actor tells WENN. "On YouTube you can see it. In the film Mario just jumped over a bunch of miners that were extras and some of them real miners. In the first take, I jumped over them and I find Mario. He was right there in front of me and it was a very surreal experience just to find the character you're playing right there."

Banderas admits the film was a very special experience for him - because he was transfixed by the news coverage of the trapped miners in 2010, and he's convinced their plight underground served to remind people what's important in life.

"I remember watching on television and thinking there are many people all around the world feeling what I am feeling," he explains. "We reflect through the movie the most simple things are the most important. It reminds us that outside of the mine that we are involved in this crazy world in which if you don't have a car you won't be happy; the newest model, the newest phone. It's reduced to the most simple things and that's what I got out of the movie watching the families fighting for life to find each other again.

"I'm really proud to be a part of this movie because the message is very strong."