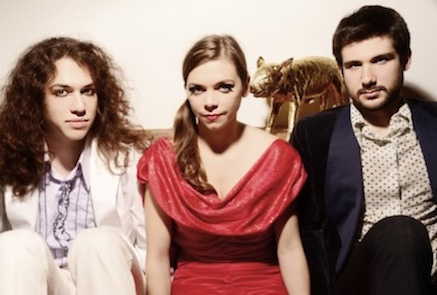 Arc Iris is inspired by 70s pop, folk and country traditions, cabaret, jazz and classical. The eclectic new project from the former Low Anthem member draws on diverse influences ranging from Led Zeppelin to Grizzly Bear, from Joni Mitchell to Dirty Projectors, and from Miles Davis to Chopin. A singer, multi-instrumentalist, classical composer and former NASA researcher, Adams formed the collective with primary musicians Zach Tenorio-Miller (piano), Ray Belli (drums), Max Johnson (bass), Robin Ryczek (cello) and Mike Irwin (trumpet) among others to present her ambitious new songs. The rhythm section has been playing together since high school and cut their teeth at the School of Rock where they shared a stage with musicians such as Slash, Perry Farrell, Andrew WK, Jon Anderson of Yes and the Butthole Surfers. Arc Iris has recently played shows with Calexico, CocoRosie, Marco Benevento, Menomena, Clap Your Hands Say Yeah, Patrick Watson and Justin Townes Earle.

Before departing The Low Anthem to form Arc Iris, Adams released two universally acclaimed albums with that band, their music variously described "a sublime mix of hymnal purity and barn-storming rock" (Uncut), "magical songs laden with imagery and poignancy" (The Guardian) and "taking sadness and wistful melancholy and turning it into something beautiful" (NME)