'Do you like rock and roll music? 'Cause I don't know if I do', interjects Win Butler at the start of opener 'Normal Person'. Except it isn't any ordinary beginning. Indeed, this show, one of only five UK dates Arcade Fire (billed as The Reflektors) will play this year, is anything but normal. With no support act and the band scheduled to appear on stage a full ninety minutes after doors open, sceptics would probably have expected it to be little more than an exercise in getting the band on and off in as short a time frame as possible. Wham, bam and thank you mam. How wrong they could be. Unbelievably so, in fact. Because even before queuing fans are allowed inside the venue, there's a hive of activity taking place around the venue's foyer. Fans bedecked in all manner of fancy dress and 'Reflektor' style masks mimicking the album cover parade outside, joined by a mariachi band - the one off the Doritos television advert no less - where they'll march to a nearby tram stop, the hummed refrain of 'Wake Up' ringing through the Blackpool night sky. As the tram pulls in, six figures donning large papier-mache heads depicting Win Butler and co. step off and pandemonium ensues. Is it the band or a group of well dressed and overly fixated fans? It doesn't really matter; such is the party atmosphere their appearance has generated. By the time the procession reaches Blackpool's Winter Gardens where the ornate Empress Ballroom is situated, it's already created a major talking point. Was that really Win, Regine and co. arriving at the gig via public transport? 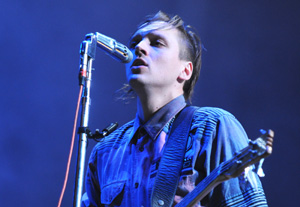 The truth is possibly revealed when showtime begins. As the six figures arrive on stage, greeted by the familiar introductory bassline from 'Rebellion (Lies)', arguably their best-known song from debut long player 'Funeral', it takes a further thirty seconds or so for the actual band to appear, wave the doppelgangers away and launch into 'Normal Person'. At this point the room is stunned into silence. But then this will be no ordinary run of the mill gig. They play a set largely consisting of material taken from 'Reflektor', an album whose early reviews bordered on the unfavourable. This was mainly because the PR campaign involved sending journalists to a listening party in a swanky London bar, plying them with free booze while the album played in the foreground then sending them away to construct an article based on that experience. Since then, many writers who participated in that process have been forced to eat humble pie, admitting their negative statements of intent may have been crafted a little too hastily. For the rest of us, 'Reflektor''s appeal has been one of steady growth, an album that blossoms with familiarity rather than instantly punching for the jugular. So when 'Normal Person' quickly segues into the robotic electronica of 'Flashbulb Eyes', it's met with whoops, screams and an all-inclusive communal spirit not witnessed since the halcyon days of acid house some twenty-five years earlier.

They follow that with 'Neighbourhood #3 (Power Out)'; the first time Arcade Fire delve into their back catalogue this evening only serving to raise excitement levels even further. A handful of songs from the new record arrive in quick succession, culminating in 'Reflektor''s standpoint and most accessible number 'Afterlife', which actually feels like a historical moment in time, neck hairs raised accordingly along with 3,000 voices singing the song's chorus back to them. It's at the song's juncture that Win Butler smiles before claiming this to be the best show he and his band have ever played. The Regine Chassagne sung 'Sprawl II', the only number aired from 2010's 'The Suburbs' long player this evening, gives way to a tumultuous 'Wake Up' as vocal chords erupt in cataclysmic delight all around. The obligatory cover comes next. Having already paid homage to Devo and The Clash at previous shows on this tour, it's The Ramones' turn to be given an Arcade Fire makeover next with 'Today Your Love, Tomorrow The World' off their 1976 self-titled debut being given an orchestral chamber pop reworking.  Closing with 'Here Comes The Night Time', another of 'Reflektor''s most immediate moments, on any other night this would be the perfect finale. But then, to reiterate once more, this really isn't any other night.

So, without further ado, the band return once more with a three-song encore drawing on the past that defined them ('My Body Is A Cage', 'Haiti') and sandwiching the present with the new album's title track in all its Studio 54 aping eight-minutes long glory. Not that the party's anywhere near over. For an hour and a half after, Butler, resplendent in mask and costume, will entertain the massed throng with a selection of tunes ranging from LCD Soundsystem's 'Losing My Edge' to Spacemen 3's 'Walking With Jesus'. Afterwards, he'll go for a stroll through the still-crowded dancefloor, meeting, greeting and posing for pictures with all and sundry; a human touch from the frontman of an evidently larger than life band. As events go, tonight's show will be spoken about for years to come with those here having played their part in musical history; it's this generation's Spike Island event. For those still unsure of 'Reflektor''s greatness, you really have to see them perform it live. Earls Court awaits next June, although I suspect their may be other, more grandiose spectacles in waiting to be announced imminently.