Review of The Suburbs Album by Arcade Fire

Three years is a long time in music; just ask the likes of Mika, Klaxons or Kanye West, all of whom could do no wrong back in 2007 yet each of which has since fallen by the wayside either critically, commercially or both. While it may be a harsh indictment to place at the feet of messrs Reynolds, Taylor-Brown and co., the point remains that the musical landscape has switched dramatically in what in reality is such a short space of time, deeming so many lauded artists of the day irrelevant in the process. That Montreal's Arcade Fire haven't entered the quagmire of dismissal speaks volumes for their concise, but ultimately consistent output. 2004's 'Funeral' has stood the test of time ever since, quite rightly exemplified by its subsequent status as one of the most astonishing debuts of the past (or indeed one before it) decade, while follow-up 'Neon Bible', despite containing the odd flaw here and there, still wiped the floor with 99% of its contemporaries upon release. 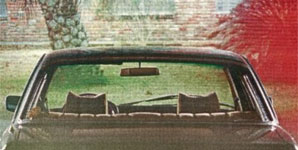 That said, it's been something of a long wait for album number three for Win Butler and his assorted companions and collaborators. Indeed, the last time his band played on these shores prior to the recent Hackney Empire show three weeks ago led to the infamous show throwing incident culminating in Butler storming off stage and threatening to never return to these shores again. Nevertheless, the downtime he and his band have spent in the interim period between touring 'Neon Bible' and the present hasn't been one of relaxation or wastefulness. Instead Win and William Butler have taken a step back in time, re-examined their childhood roots and created a concept album of sorts firmly inspired by the suburbs of Houston where they were born and raised.

Indeed, despite the connected lyrical and narrative themes of 'The Suburbs', it is possibly the most musically diverse record the Arcade Fire have conjured up to date. While the opening and title track of the record's early appearance online gave some indication of what to expect, it really only tells a minor part - one sixteenth to be exact - of the whole story here. "You always seemed so sure that one day we'd fail" suggests the elder of the two Butlers over the top of a late night bar style piano melody. By way of an introduction it sets the scene impeccably, if a little deceptive as to what follows hereon after.

'Ready To Start' bursts into life in the same way 'Black Mirror' heralded the arrival of its predecessor. Although only two songs in, this is by far the most typical Arcade Fire moment of yore on the entire record, possibly due in no small part to 'Neon Bible' producer Markus Dravs involvement behind the mixing desk. As widescreen statements of colossal pop intention go, it doesn't get any broader than this. That it gives way to the introverted 'Modern Man' (key lyric: "The people behind me don't understand") or hymnal 'Rococo' without anything sounding incoherent or out of place speaks volumes.

The fast-paced, shoegaze-tinged 'Empty Room' springs the first surprise of 'The Suburbs'. While not exactly a million miles away from 'Keep The Car Running', Regine Chassagne's ethereal vocal coupled with halos of reverb on the chorus make this their most uncharacteristic committal to tape since forming. Both breathtaking and incisive in equal parts, it would stand out like a burning beacon anywhere else, but here amidst such hallowed company its feet stay firmly on the ground.

'City With No Children' could be U2 covering The Eagles except with a degree of sincerity not normally associated with either, Win Butler's "Never trust a millionaire" refrain striking an ambivalent chord. The orchestral 'Half Light' coupled with the drum-heavy, electronic dancier element of its sequel - think Depeche Mode round the time of 'Violator' or The Killers before Brandon Flowers started believing his own hype - fully illustrate the mix and match approach to 'The Suburbs' from a musical context. For many lesser artists this lack of a consistent flow could prove disorientating and negligible but here, it only adds to the fascination and mystique surrounding its creators.

'Suburban War', complete with Marr-esque guitars circa 'Hand That Rocks The Cradle' and a stinging riposte of "The past won't rest until we jump the fence and leave it behind" exerts the album's now familiar tone of desolation to a tee, again utilising Dravs' sound techniques that build into an anthemic stadium epic by its close. The Springsteen-like gung-ho of 'Month Of May' coupled with the chilled out reticence of 'Wasted Hours' could easily be the sound of two entirely different bands battling it out for pride of place, while 'Deep Blue' once more shows Win Butler casting a glance across the Atlantic, this time towards the Mersey and The Beatles. The solemn pronunciation that "Tomorrow there is nothing" may be inconceivable yet Butler's delivery resonates with a poise and adherence that makes every last syllable ring true.

That 'The Suburbs' is sixteen tracks and over an hour in length can make it heavy, if occasionally uneasy listening at times and the moody 'We Used To Wait' does pass by largely unnoticed. 'Sprawl I' - subtitled '(Flatland)' - takes their now familiar melancholia to new levels of disparity, Butler's admission that his walk through Houston's satellite sprawl was "The loneliest day of my life" suggesting any love affair he may have once enjoyed with the place of his birth is now well and truly over. By the time the electro chug of 'Sprawl II (Mountains Be.)' cascades into life, Regine Chassagne insisting "The shopping malls make mountains beyond mountains", its apparently clear that the main concept of this record isn't to reminisce about old times, but more a way of expressing disappointment at the commercialised spectacle their one-time home city has become.

That the album draws to a close by taking us back to the beginning via a mellifluous if poignant duet between Butler and spouse Chassagne, further illustrating that 'The Suburbs' is more than just a passing observation, but an ongoing dictum.

On the whole, 'The Suburbs' more than lives up to any preconceived expectations saddled around its arrival, and while Arcade Fire's climb up the ladder of mainstream success will undoubtedly continue, this is a record that far from conforming with any perceived zeitgeist pretty much redefines the standards set by both its creators and their peers in the process.