Review of We Used To Wait Single by Arcade Fire 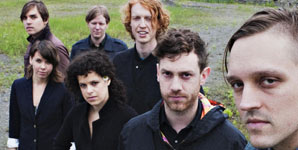 Seriously, not a single interesting thing happens in the five minutes this track rudely steals from you. A piano plinks drearily away in the background while an insipid voice quietly coo along, the whole track sounding afraid of ever doing anything lest it scare anyone - even when it does "get going" (And I use that term loosely), it still sounds like music they play in trendy clothes shops to try and cushion the blow that a cardigan and a pair of inconveniently cut jeans are going to cost you £150, and to be completely frank listening to it any more keenly than that is giving it far more attention than it deserves. Of course, people in cardigans and inconveniently cut jeans will likely praise this track (and the record it comes from) to heaven and back, but I'm afraid I simply can't agree with anyone who has anything positive to say about this other than "Well, at least it isn't Coldplay".

Nope. Instead you just get a drab waste of five minutes.

There's so little to say about this track. It just doesn't do anything, go anywhere, spark any interest, or anything else. It's the musical equivalent of beige; uninteresting and impossible to care about or have an opinion on. Do yourself a favour and listen to something a little more worthwhile: The new Gallops EP, for example, or maybe something from Three One G records' back catalogue - Just don't waste your time on this single.