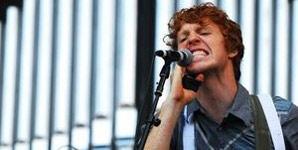 Win Butler isn't a happy man. 'If anything else gets thrown on stage tonight me and my band are never playing in Nottingham again' he announces mid-'Rebellion (Lies)' as a fluorescent pink glo-stick lands at the side of him. Minutes earlier during 'Neighborhood #3 (Power Out)', a white training shoe hit Butler full in the face, prompting him to throw down his guitar, knock over the mic stand and momentarily leave the stage, returning to change the song's lyrics to "Where'd you go? No, seriously, Where'd you go you fucker?"

Unfortunate then that the actions of a couple of undoubtedly drunken revellers brought one of the most spectacular shows to ever grace this arena - and this city - to a couple of unnecessary, if only temporary, halts.

What preceded the aforementioned commotion was a pretty much-unblemished display of musical dexterity and showmanship by possibly the most extraordinarily talented and unique troupe of musicians on the planet.

With reports from other legs of the tour suggesting that their previous shows had been nothing short of sensational - and anyone fortunate enough to have witnessed them at any of this summer's festivals will second that - their first ever visit to Nottingham was always going to be a memorable one, if not entirely for the right reasons.

Adorning Halloween make-up and masks, from the opening 'Black Mirror' through a delightful 'Haiti' and a rousing rendition of 'The Well And The Lighthouse', the ten-strong band didn't relax for a minute, band members moving around the stage from drums to keyboards, exchanging guitars for brass instruments and so on. Recent b-side 'Surf City Eastern Block' got a rare outing, while their interpretation of The Smiths' classic 'Still Ill' followed suit, sounding not unlike one of their own compositions as opposed to the throwaway cover version that was intended.

Despite a muted response from most of those seated - arenas perhaps aren't the best kind of setting for a band of this kind - the standing section in the middle was a completely different story, and as with previous Arcade Fire live shows whereby the band seemingly build themselves up into a frenzied climax, tonight was no exception. Until the aforementioned missile throwing that is, which for two songs seemed to knock them out of their stride a little.

Thankfully, being the professionals they are, they still managed to return for a flawless encore, opening with the seismic 'Intervention' before arriving effortlessly at a tumultuous 'Wake Up' whereby Win Butler spent the entire song among the audience shaking hands, joking and posing for pictures, the events of those few mad minutes earlier seemingly forgotten.

Whether The Arcade Fire do return to Nottingham in the future only time will tell, but tonight's performance will live long in the memory.