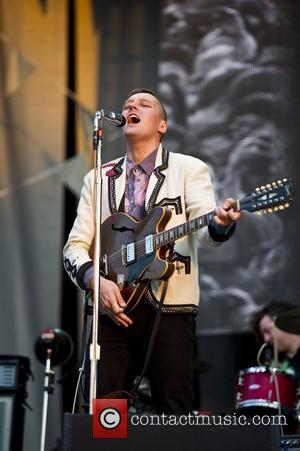 Arcade Fire emerged from behind a black curtain at a full moon masquerade in Brooklyn on Friday night (October 18, 2013) to play to around a thousand 'golden ticket' holders at a re-purposed warehouse in the artistic haven of Bushwick.

Those lucky enough to secure tickets were instructed to dress in either formal attire or festive costumes and most complied. Wolves, sailors and a banana-man squeezed into the old building on a desolate street, reports Billboard.com.

The interior of the red-brick building had been decked out with streamers, disco balls, mirrored pyramids and multi-colored string lighting. It looked like a 1970s disco prom.

And then there was Arcade Fire, who launched into their James-Murphy produced new single Reflecktor. Unfortunately, David Bowie was nowhere to be seen.

Nevertheless, the Canadian collective - introduced by frontman Win Butler as a fictional band named The Reflecktors - were full of verve as they road-tested new material. Only two old songs were played Sprawl II and Neighborhood #3 (Power Out) though even these were introduced as covers of "a Montreal band called Arcade Fire."

Towards the end of the set, Butler jumped off the stage and scurried towards a side exit as the rest of the band disappeared offstage.

After a 20 minute break - during which the fans fixed their gazes firmly on the stage - Butler reappeared wearing a Ramones t-shirt. However, he only instructed that the show was over and chastised the room for "making this awkward by making me have to explain this to you."

The masse filtered out of the old warehouse and made the long walk back to the subway.

The show took place as part of the weekend's CMJ Music Marathon which hit New York City between October 15 and 19, 2013.

Arcade Fire's fourth studio album Reflektor is scheduled to be released on October 28, 2013.