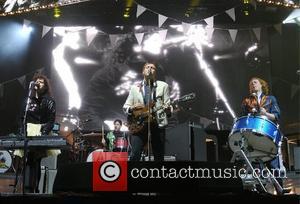 It has emerged that Arcade Fire are planning to release the follow-up to 2010's The Suburbs this September, with a source close to the band confirming the update to the news blog of Revolt TV. The blog said that it only learnt the date of the release and no other details, with the album set to go on sale on September 9.

The band have been working on the album pretty solidly since coming off of their extensive tour on the back of the release of their third album. Although no tracks from the still-untitled album have emerged online yet, we do know that the Canadian rockers have been working with DFA founder and former LCD Soundsystem frontman James Murphy to produce the September-release.

Earlier this year, Murphy said that he hasn't had too much of an influence on the seven member group - led by Win Butler and Régine Chassagne - as they are all seasoned studio experts. He also expressed his excitement over the album and told the Daily Star in June, "The album is going great. I am too in the middle of it to know which way it will go in the end. But it's going to be a fantastic record."

Band drummer Jeremy Gara told Canadian radio station CKCU last year that the band had been planning on releasing the album in late 2013, so the Revolt article does hold up to an extent. We still have some time to go before the band release their fourth album, but after the immense success of The Suburbs and the the sheer quality of their first two albums, Funeral and Neon Bible, it may very well be worth the wait. The group have been working with James Murphy