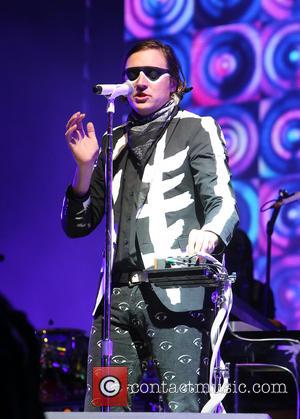 Rockers Arcade Fire brought the curtain down on the opening day of the 2014 Glastonbury festival with a spectacular ticker tape parade and fireworks display as frontman Win Butler declared the gig the "highlight" of the band's career.

The Canadian rockers took to the main stage of the event in England on Friday night (27Jun14) after a day in which a huge thunderstorm caused an hour-long power outage and several acts, including singer Lily Allen, had to shorten their planned sets.

The headliners performed for almost two hours, opening their show with a fireworks display and treating the crowd to a ticker tape carnival during their encore of Here Comes the Night Time.

Before closing their set with Wake Up, Butler told the crowd the band had experienced "amazing things" in its career, adding, "This has got to be the highlight."

Speaking after their performance, he says, "I feel like we went back to medieval England and surveyed and saw all of humanity at the same time... We've never been in front of a crowd like that... Yeah, it's definitely a powerful experience."

Saturday (28Jun14) is set to feature performances by rockers Robert Plant, Pixies, and Jack White, and singer Lana Del Rey before a headline set from Metallica.