Progressive, experimental rock band Arcane Roots releases their latest album Left Fire through Play It Again Sam Records. It's an ambitious, motivated release, clearly put together with a lot of talent, but does that necessarily mean that it's any good? 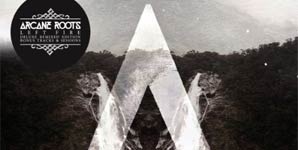 A listener could initially be forgiven for being a bit dubious about this album. The opener, Aus Blauderen Verederen, Dus Moet Ik, is completely without lyrics and, apparently, completely without song structure either. It's, to use exactly the right word, unsettling. The new listener isn't left with much hope for the rest of the album, if this song is the trendsetter. However, the more this album is listened to, the more Aus Blauderen Verederen, Dus Moet Ik begins to make sense. A listener realises that Arcane Root's music is progressive and experimental, more than it is 'rock'. In fact, 'rock' is just a word used because nothing else seems to fit.

It makes more sense when reviewing this album to talk about the aspects that stand out the most and what the music focuses on. To that end, it's necessary to talk about the music itself first, before the vocals or the production, or anything else. Clearly, the instruments are the most important element of the music on this album. Arcane Roots seem to want to push the boundaries of how songs are put together, as if they have looked at a guitar, a bass and drums and how all of them are 'ordinarily' played and said to themselves, 'How can we make that different?' In fact, it's a very similar attitude to that of rockers Incubus in the ways in which the instruments are at the forefront of the music and played with unashamed, showcased talent. And why shouldn't they show off? It's excellent, and very well done.

Vocally, the singing fits perfectly. It's not too intrusive a voice, sitting perfectly behind the instruments, accentuating them just enough to give the impression of song rather than improvisation. The high pitched tones don't get in the way of the music and are present enough to just remind the listener that they are there. Very well done.

Highlights of this album? You Are is complete genius. An amazing song, very well put together and performed. Overall, a stunning and talented release and hopefully the music scene will be seeing more of Arcane Roots very soon. There's something for everyone here, Habibty will keep the more metal-inclined of listeners happy, whilst Million Dollar Que$tion, along with the rest of the album, really, has the potential to keep the softer listeners occupied also. Fantastic.